This weekend I had the unique experience of rooting for the opposing team. It was the first time I’d been to a sporting event where the team I preferred was playing and was the visiting team. Granted, most of the sporting events I’ve been to in DC have been hockey (and I’m a Caps fan), baseball (which is a sport that I don’t have any opinion on) or football (and I haven’t yet been to a game where my team plays the Redskins; prior to that I was always at my team’s games) and then I’ve been to several DC United games, but never playing…FC Dallas! 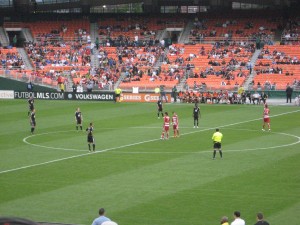 And it was a fun game, even if it was 0-0. Oh, the joys of scoring in soccer. We had some pretty decent seats, and there’s just an excitement at the stadium that can never be replicated watching a game at home, even in HD. And maybe it comes close if you’re at a sports bar, but…no, not really.

So now that FC Dallas has headed home (or to their next game), I can go back to paying attention to DC United. I’m looking forward to attending several more games this summer, as it has been a few years since I’ve been to RFK. And since for these next games, I’ll be cheering for the home team again, I don’t have to look around and cheer quietly when our awesome goalkeeper catches the ball.