Saturday was one of those rare days when everything seems to just really, really come together. You know those days that I mean?

It started off with incredible weather. Warm(ish), sunny…blue skies after a week with more rain and clouds than sun. And then I’d also heard about a French Market in Georgetown, which was apparently in it’s eighth year though this was the first time I’d heard about it. And along with discovering the French Market for myself, I also made a few other discoveries: places that have been around for some time, but were all new to me. Like Book Hill Park in Georgetown at the top of the French Market. 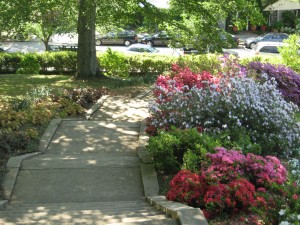 One of the stores I went into after viewing their table at the French Market, was a store full of handpainted tableware, which was beautiful and made me think of a long table for a weekend lunch in the south of France or Tuscany, or somewhere like that. And then of course there were the sidewalk crepes from Cafe Bonaparte. These were near where I started, so I waited until my walk back for a Nutella crepe, eaten there on the sidewalk in the sun….c’etais incroyable!

And then after that, I had some time before a movie started so I figured I’d go down to the Lincoln Memorial for a bit. It’d been awhile since I’ve been down to that part of the mall. The last time was passing through to the Tidal Basin for the cherry blossoms. But on my way, walking aimlessly on a route I hadn’t really taken before, I passed by a new (to me) and intriguing coffeehouse: Bourbon Coffee. Yum! 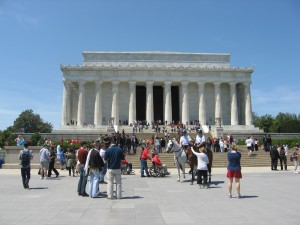 I did make it down to the Lincoln Memorial, and it was nice. Thought they are apparently doing some work on the reflecting pool (and so there is no reflecting pool), so the view wasn’t as impressive as it normally is. Don’t get me wrong, it’s still incredible. After that I took myself to a movie down in Chinatown and by then, the day was just about over.

It wasn’t an entirely productive day, but sometimes we need non-productive days to recharge. Well…actually, this isn’t entirely true. I had several ideas going through my mind, and I think just being outside enjoying the view let me dwell on them and I have some ideas now to work through. I know…so mysterious sounding. But we’ll see what comes with them.

But in the meantime, I can at least cheer the warmer weather and sunshine. Oh how I’ve missed you!