I had quite possibly the most picturesque introduction to Germany by flying into Munich when I did. My flight made its descent in the early morning, the soft sunlight turning the carefully squared fields into bars of gold, the fog burning off along the tree line, and villages of white houses with red tiled roofs scattered throughout the land. I’m even pretty sure we flew over a palace straddling a river.

Good morning Munich, it’s nice to meet you too. 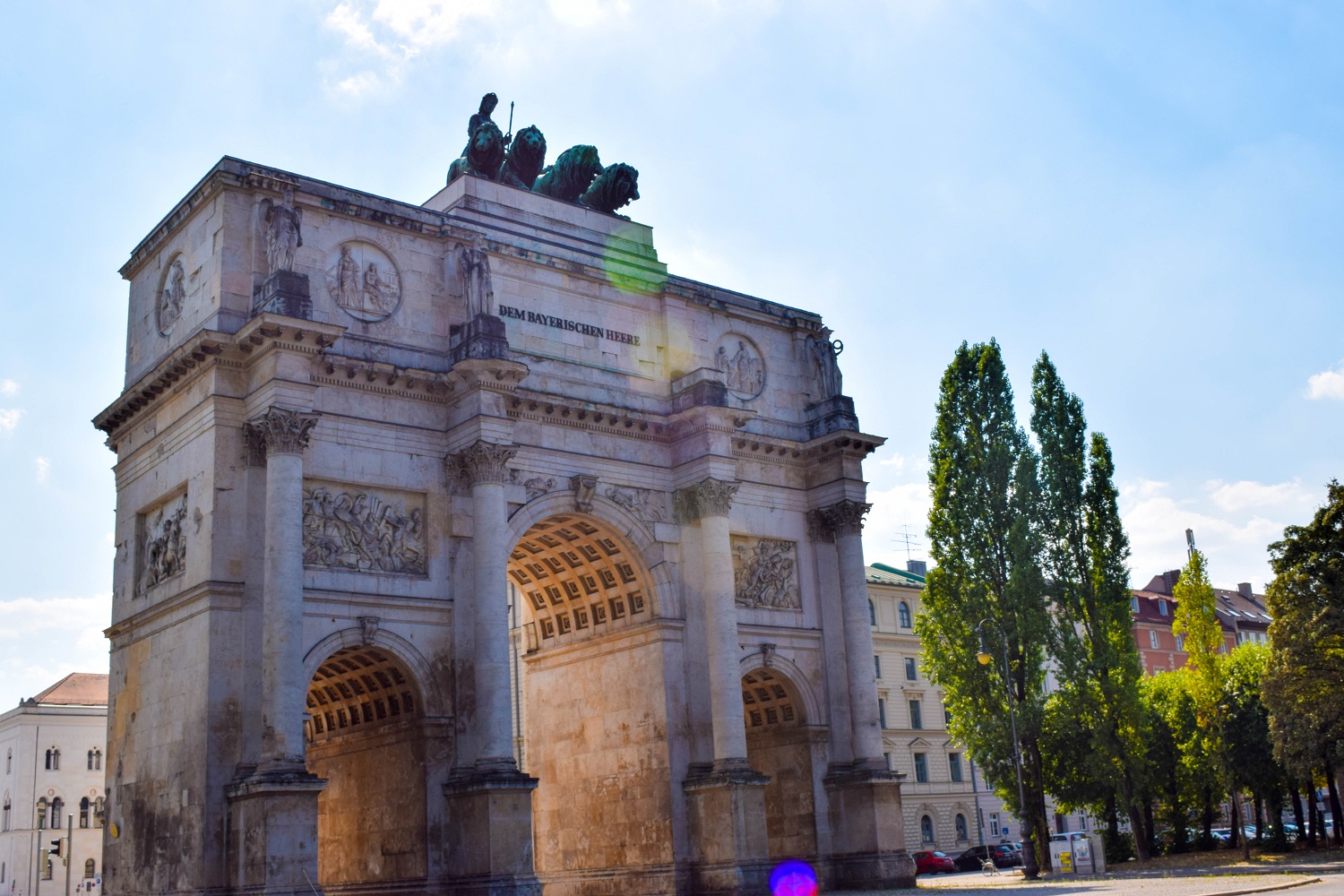 Despite such a calming greeting, I did – however – get completely and utterly lost three times during my stay. Each time I was eventually able to find something (a cross-street, church towers spied over rooftops) to reorient myself. And then I could find my way to where I spent most of my time, in Altstadt – the Old Town. But getting lost was all to easy to do. The old stone streets curved one way, and then those same streets changed names, sometimes with the original street continuing as a walkway while the roadway curved…which meant my carefully researched directions from the Lufthansa airport shuttle drop-off point to my hotel became somewhat useless.

But then, I would be back Old Town. And then lost-born grumpiness melted away. I was in Munich! A city supposedly established in the 1100s. The 1100s! I walked across the cobblestone streets, wove through sidewalk cafe tables, crossed streets in front of looming stone buildings and found solace in the shade on those narrow, curved streets I may have cursed earlier. 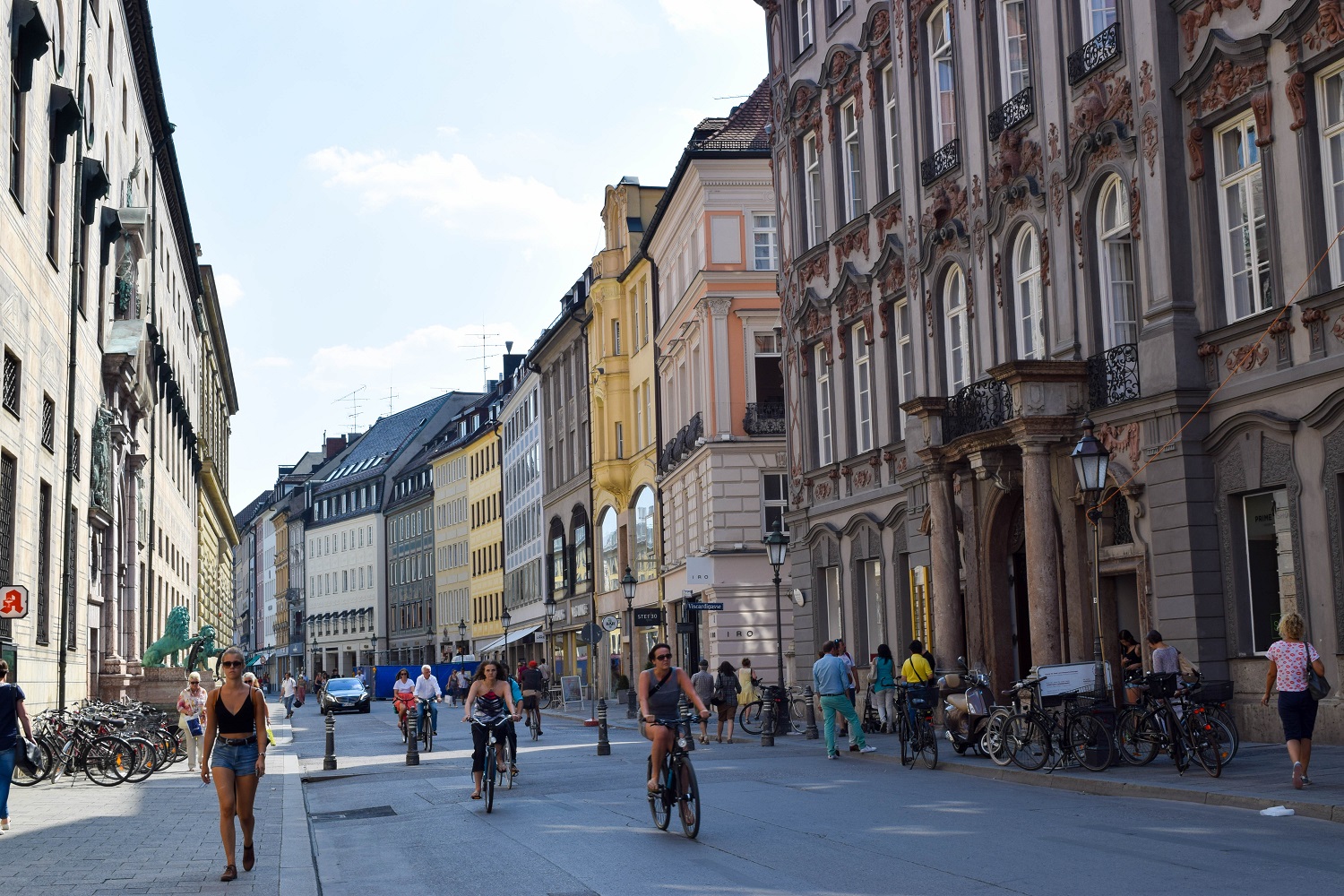 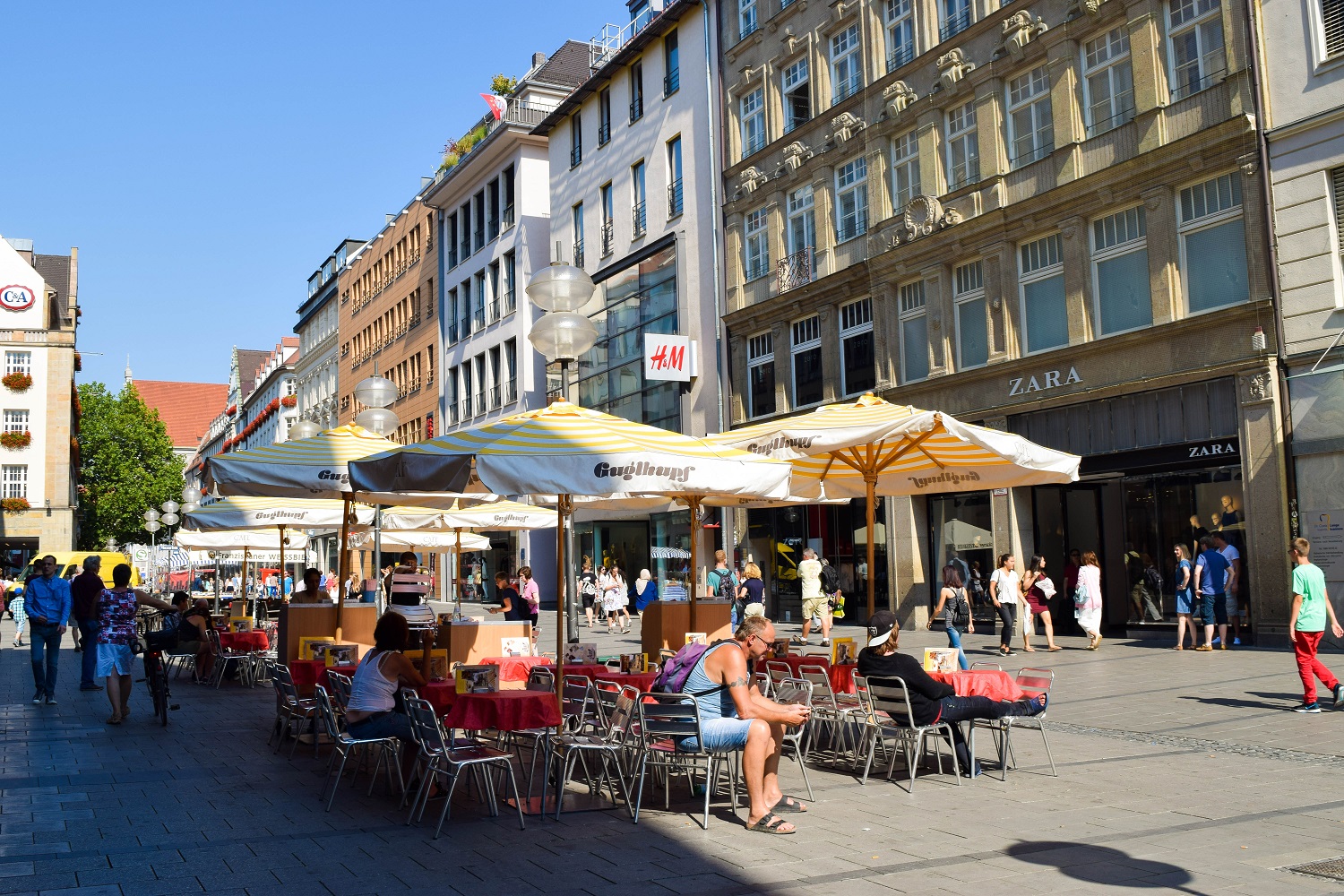 I didn’t mind so much the getting lost in Altstadt. I would just sit down on some city steps to get my bearings (and yes, maybe consult my map if I had been lost for a little bit longer than I wanted to be lost), or stand next to the fruit vendors while trying to find street signs that might be on a pole, or on a building, behind a tree or not there at all. But it seemed that every couple of blocks I passed fruit vendors, so if I couldn’t find my street, I could just move on to the next stand. And those vendors sold fruit picked at the height of ripeness. I know, because I inhaled deeply as I passed, and wished for similar such vendors in Dallas. Oh! I loved these fruit vendors. I’m still envious of Munich for all that fruit. 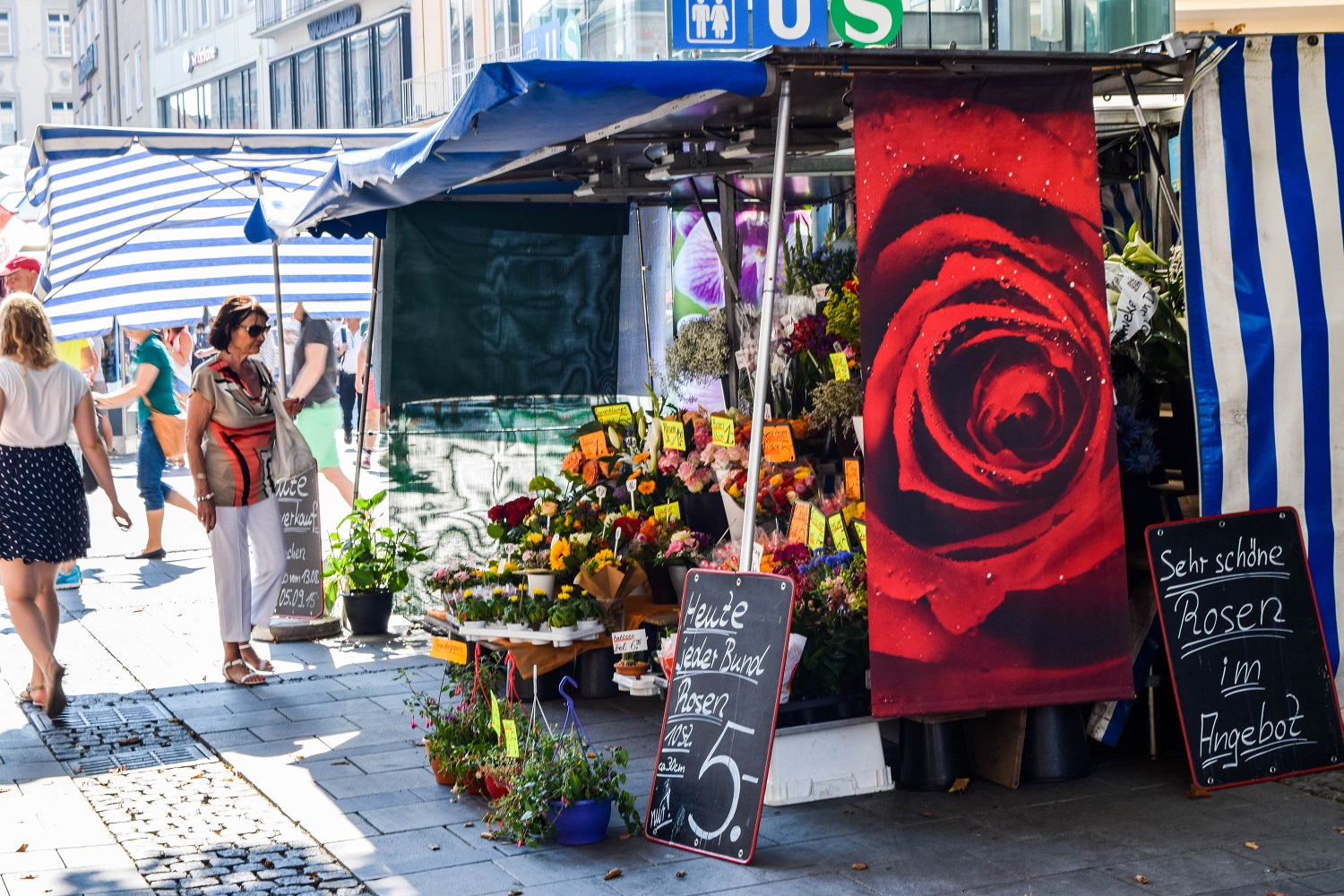 Flower Vendor – also amazing for the colors and smells, just like the fruit vendors.

After finally finding my hotel after the first time I was incredibly lost, I would get lost two more times in Munich: 1) trying to find my way back to Old Town from the English Gardens and 2) trying to get back to the Lufthansa airport shuttle for the airport.

Maybe three more times…I did get a little lost inside the English Gardens, which resulted in me leaving out of a different area than where I entered the gardens, even though I tried to follow the water. But I look at it this way: getting lost let me see parts of Munich that I would not have otherwise seen. While this was primarily around the Altstadt and Karlplatz, I saw more of the gardens then I’d planned and got to wander a little among more residential areas. And had I left the Gardens the way I entered them, then I also would have missed seeing the Victory Gate. I didn’t think the Gate was within walking distance of where I stayed, but it was on my way back to the Altstadt once I reoriented myself. 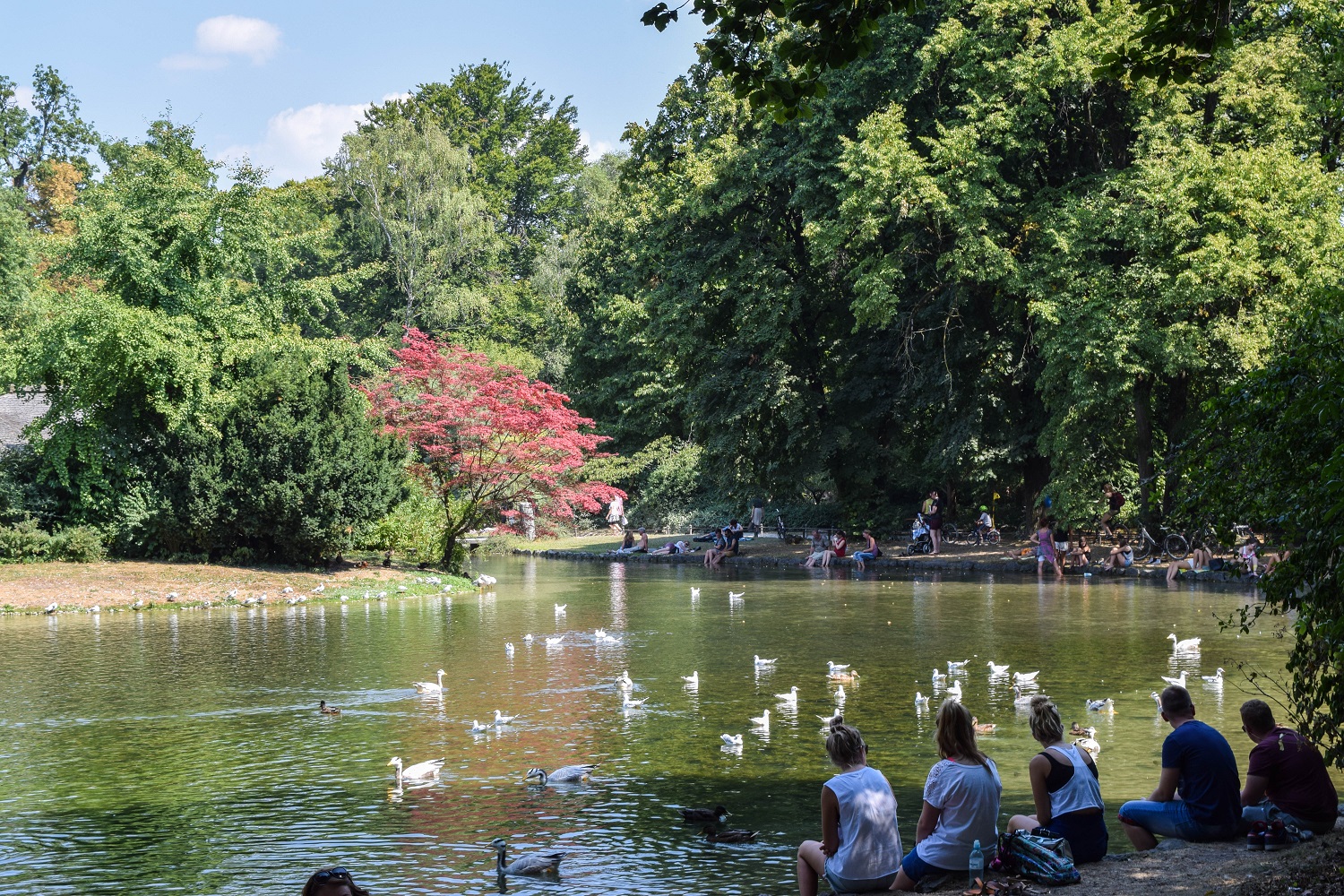 I really enjoyed in Munich, and there is more that I wish I could have done. Still, I got to see the surfers in the English Gardens (more on that later), listen to Vivaldi playing the gazebo of the Hofgarten, wander the Viktualienmarkt and wander among the ornate, gilded halls of the Residenz Museum – the Wittelsbach’s palace of Bavarian kings (more on the palace to come as well).

Have you been to Munich? What did you enjoy about it, or what do you want to see when you visit? 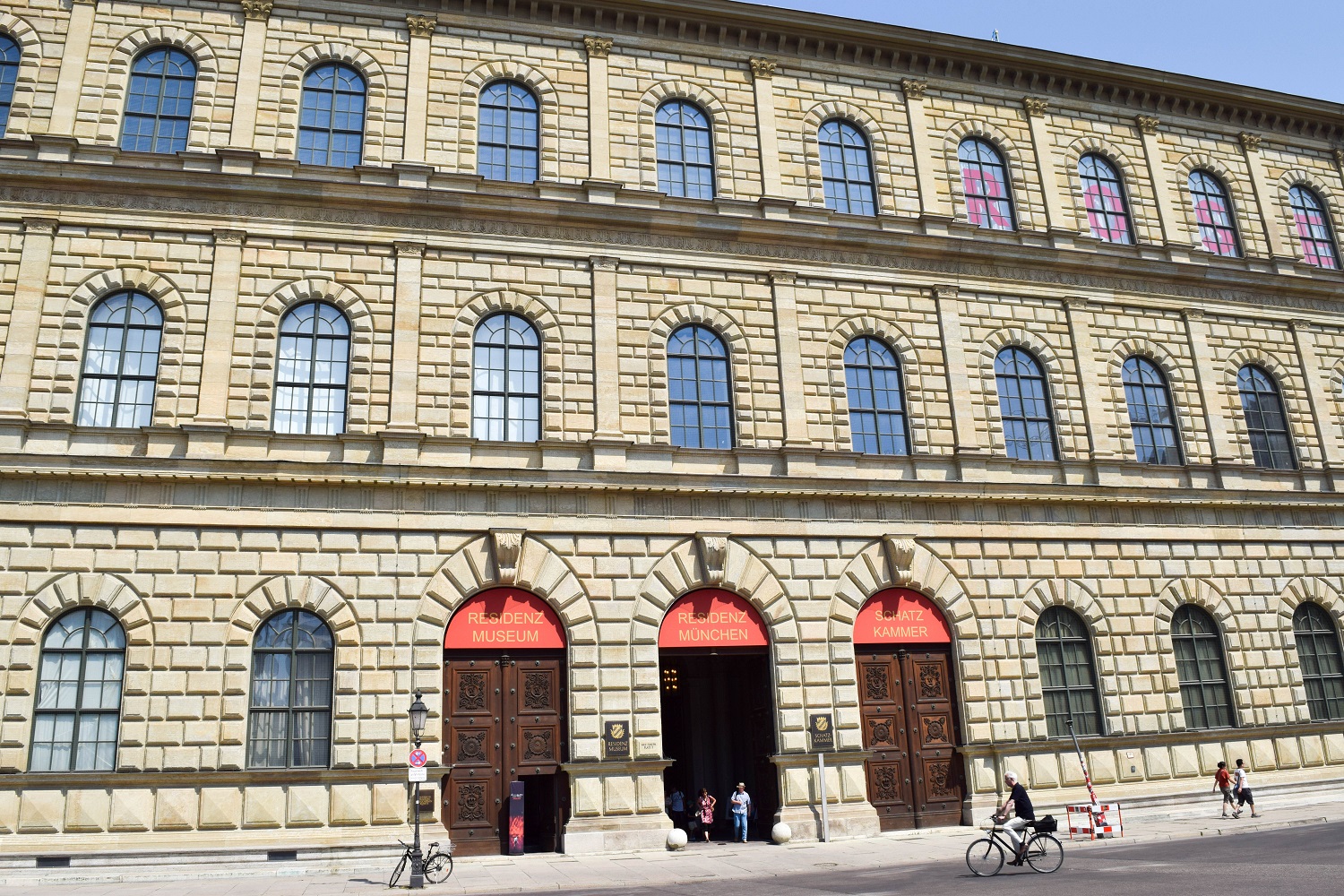 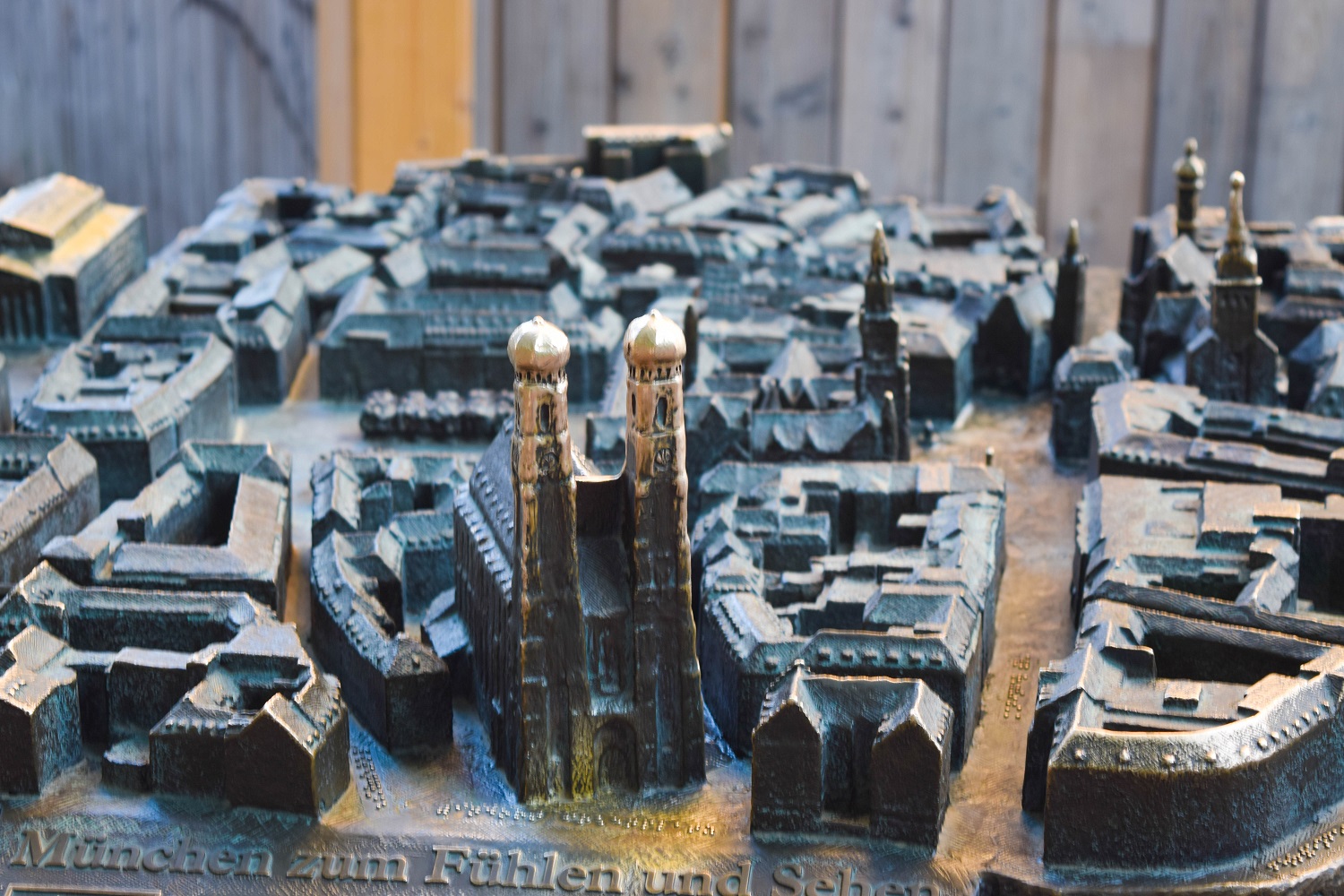