I’ve said it before, but fall brings the festival season back to DC. Already I’ve been to the National Book Festival, the Turkish Festival, the Festa Italiana and one day of Taste of DC. All which will have descriptions coming soon, of course. And also next weekend brings the Taste of Georgetown.

But the H Street Festival was new on my festival activity calendar. It was a little out of my way, but I’m hearing about H Street a lot, as one of the trendy new neighborhoods where it seems so many restaurants and new “places to be” are opening. So I was intrigued. And let me say this: H Street knows how to throw a party.

I’d been to other neighborhood festivals before, and they felt a little more low key. There were more tents/booths set up for shopping and sure, there was music on either end and other spots of entertainment along the way. But at H Street, it was more like a college neighborhood party. If that makes sense. Sure there were some spots for shopping, but there were food trucks parked around (including the Dangerously Delicious Pies which are amazing), and it was fun getting some fish tacos with lots of hot sauce and sitting around listening to a band playing. Plus…I think the Baltimore Rock Opera added to the party atmosphere. Oh, and also got to meet some players from DC United, which was definitely fun. 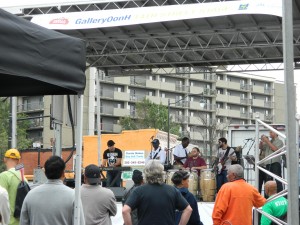 So yes, even with a light spattering of rain, it was a great way to spend the afternoon. I even found a new coffeehouse I kind of liked, and tried a delicious pie, spent time with a friend and listened to some decent music. And I wouldn’t mind going back to H Street, though I do have to admit it’s a bit of a hike for me, so it’s not likely to be a spur of the moment thing. But still.