Two weekends ago the National Book Festival held on the mall, and it was the first time the festival was held on two days. Yup. TWO. 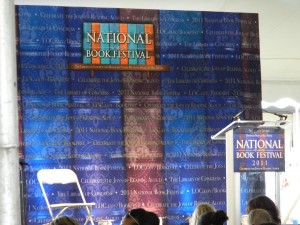 Every year I look forward to the festival. Last year was the first year I actually stood in line for the book signings, and I ended up not having much of a chance to hear anyone speak. But of course, one kind of shouldn’t pass up the opportunity to have one of these authors sign a book.

So this year I opted for balance. I planned to wait for one author signing and then spend the rest of the afternoon at author speaking times. And since there were two days, I could go back on Sunday and listen to more. On Sunday the main author I wanted to see was David McCullough, who’s signing time was several hours earlier. I do however already have a book signed (though it’s currently in another state), so I opted to pass on that and headed down to the mall mid-afternoon and sat in some different tents until it was time for him.

I won’t get into the details of the different speakers, but as always when I attend, I definitely get inspired to write. After hearing the first speaker on Saturday morning, I was ready to head home right then and get back to my laptop. Though I managed to refrain so I could stick around for more.