Home Uncategorized always something going on and Borders closing

always something going on and Borders closing

In DC, chances are there’s usually something going on. And unlike other places where you might have to do a little research to find out a weekend’s happenings, a lot of the times here one just stumbles on them.

Take this weekend, for example. I went out to do some shopping, and as I walked up towards Dupont Circle, I saw a gathering of people, an American flag and some signs. Hmmmm, I thought. I wonder what’s going on here. I think it was just getting started, as many of the signs weren’t yet being raised and I couldn’t read them. 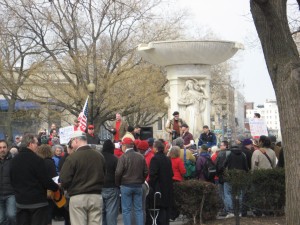 I also learned this weekend that the Borders on 18th and L is closing…which I have to say surprised me. The other one on 14th closed over the summer, and as much as I hated to see it go, it made a little more sense to me. After all, it was very close to the other one and so if you were only going to have one in NW DC, the other one would be it (because I’d also heard it was a very successful store). Which is why I’m surprised to see it closing. And sad.

What also makes me sad is learning that my store on Park and Preston (in Texas) is closing. I loooved that store! Of course I can’t go that often, but usually once each visit. But wow, once I turned 16, I spent so much time there. It was what I did in the evenings or weekend afternoons when I would just browse the store for new books and usually leave with two or three books. At least. And then of course I’d head over to one of my favorite Starbucks to start reading.

Dallas has other Borders, including another one that I love to visit (and I hope it’s not closing) and many other bookstores. And so does DC of course. But with the one in Dallas, it’s the memories. Like also checking out one day on a visit home from college and running into a friend from high school I hadn’t spoken with in a few years.

So I think I know what I’ll be doing again this coming weekend. Even though I have tried to limit myself from book buying, given the 15 or so books in my to-read pile, I think I’ll go back and browse a few bookstores. And more than likely, buy a few new books. Because you can look online, but I don’t think it compares to the discovery of finding a new book on the shelves and then being so excited to start reading it.