The other weekend I attended another festival in DC, this time the Fiesta Asia. And of course, when I mentioned that I planned to check it out, friends wondered if Fiesta was a word in any Asian language (no, I don’t think it is). But it was fun, regardless of the word used for the celebrations.

There was a dragon dance going on right around the time I stopped by. It wasn’t the one long, snaking dragon, but two smaller dragons that interacted with each other. And given that there were two people performing as one dragon, some of the dance was pretty incredible. There was one instance where the dragons dropped to the ground and rolled over…and it had to have been perfectly timed otherwise it wouldn’t work. 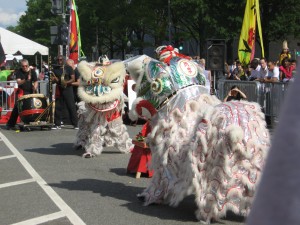 Later after I wandered around for a bit, there was also a Tae Kwon Do demonstration, which was also kind of fun. You see in movies and on TV where they can chop wooden boards in half and that afternoon I got to see that in person. I got to have an Asian style vegetarian empanada, though sadly I was there too late for the flavored bubble tea. And as I headed out, there was also a band that caught my attention. It wasn’t my normal music, but Soul Craft was fun and I stuck around for their set. I’m glad I did; it was a good set. 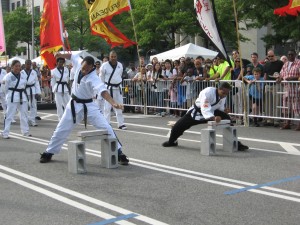 Overall it was a full afternoon, but the fiesta Asia street fair was fun. DC has a lot of fun festivals that happen throughout the year. It just requires finding out and remembering them! Take last night, for example. I was really looking forward to heading back to Freedom Plaza for tango…and then once last night came around, I completely forgot. At least there’s next weekend!