The other day while out, I passed by an area with several restaurants all with outside seating areas. I love the outside seating areas because I love sitting outside when at all possible. The only downside, which isn’t even so bad, is that sometimes they can create some sidewalk traffic congestion. When people wait for tables in nice weather, they tend to do it on the small space of sidewalk in front of the outside eating areas.

But okay. I can wind my way through the waiting people. After several years now in DC, it’s become pretty easy to do. But let me explain what happened yesterday.

So the scene is set: Small strip of sidewalk next to a restaurant with people standing around waiting for a table. I’m halfway through the group of people waiting when a couple comes towards me. The woman is pushing a stroller in front of her, which is easy to sidestep since I would walk around her anyway. Just as I go to walk past the man, almost essentially right next to him, he turns to the side to look at the restaurant and I almost walk into….

He has a chair, or a stool, strapped to his back. I’m not quite sure what it was, except that there were wooden legs sticking out from his back like a porcupine. And had I taken one step more before he turned, they would have hit me just about shoulder level.

Clearly now I find this amusing. And I did late yesterday when telling my sister (who urged me to post about this, since sometimes one just can’t make this stuff up) but when I almost ran into the chair, I was more than a little annoyed. If you’re going to have something like that strapped to your back in a crowded area, please watch where you swing it!

But aside from that…the other news is that Spring is definitely making an appearance! Cherry blossoms have begun blooming and well, that’s my marker that it’s officially spring. Vernal equinox aside. After all, it’s just a date, right? 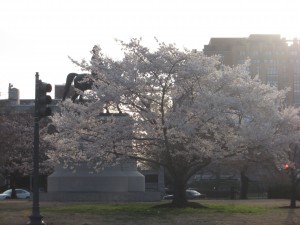