In high school, and at various times since, I studied French. And so began a love affair of all things French, finally culminating in a long awaited trip to Paris over Thanksgiving ’09. 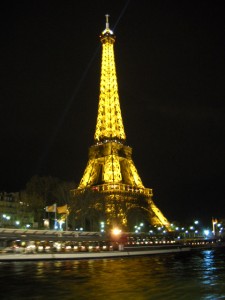 Italian was another language I’ve always wanted to learn, and a couple of years ago I finally started, taking about a year’s worth of classes. And now I’m studying by private lessons, and it’s struck me that one of the hardest things for me are the articles.

For instance, I want to use les instead of i, like I would want to say les giornali instead of i giornali. Or on that, le instead of il and mes for miei, etc. Thankfully other than the articles, a lot of the grammatical stuff is very similar, like when to conjugate in the past using essere (être) or avere (avoir). And my instructor is also very patient with me while I put together sentences at a glacial pace.

Forcing me to put those sentences together, no matter how slowly, has helped.  For one thing, I at least recognize that using les or even maintenant is the wrong language and it forces me to remember, or try to, the correct Italian word. So…I’ll get there. It just may take some time, but that’s one thing I have. Even though I hope it’s sooner rather than much later that I’ll get to post pictures from an Italian vacation.