Home Europe One Day in Belém

One Day in Belém

If you have additional time in Lisbon – and even if you don’t, I’d recommend making time – visit Belém, which is still within the Lisbon municipality. The highlight of this trip will be the 16th century Mosteiro dos Jerónimos. Walking in its ornate courtyard, the monastery took my breath away. Not to mention the church is just one more reminder that they don’t build churches like they used to build them. 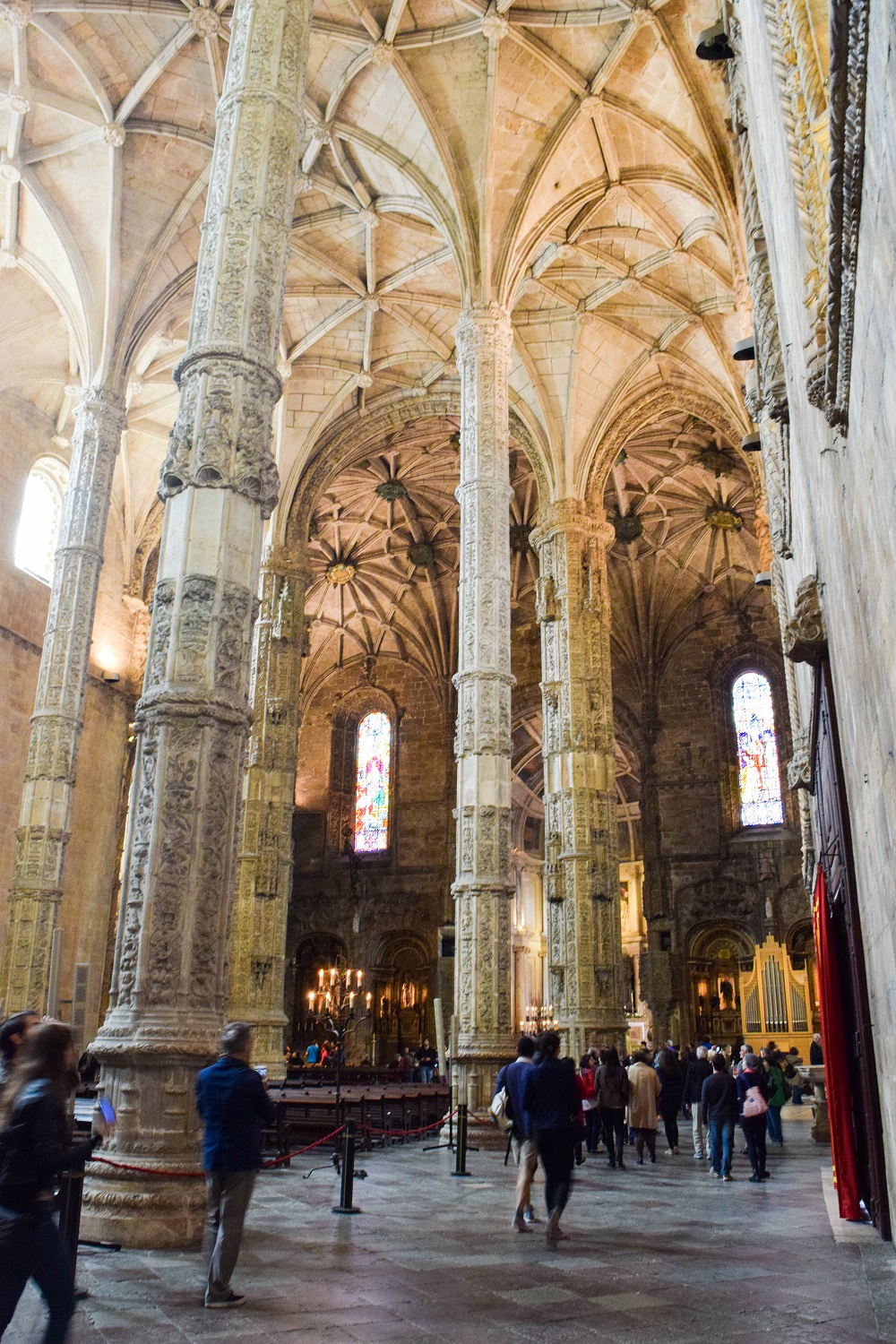 Inside the Mosteiro dos Jerónimos

Getting there is simpler than I first thought. I initially planned to take a boat tour leaving from the Praça do Comércio, but when I walked down to the river, I learned the boat was out for maintenance. So…now what to do?

After trying to figure out if I could walk to the monastery from the Rossio neighborhood, I decided to take one of those Hop On Hop Off bus tours. That took me around a few places I’d seen in the Rossio area and then on to Belém. Not to mention that I ended up having the opportunity to stop at the Basílica da Estrela, which I had read about and hoped to visit. Highlights of this tour:

The Basilica was built in the late 18th century and has a shaded, lush green park across the street, the Jardim da Estrela. The church itself is complete with grand, soaring ceilings with alcoves of statues and stands for candlelit prayers. While fairly dim when you first walk in, the dome over the center is ringed with windows letting in the sunlight in front of the alter. 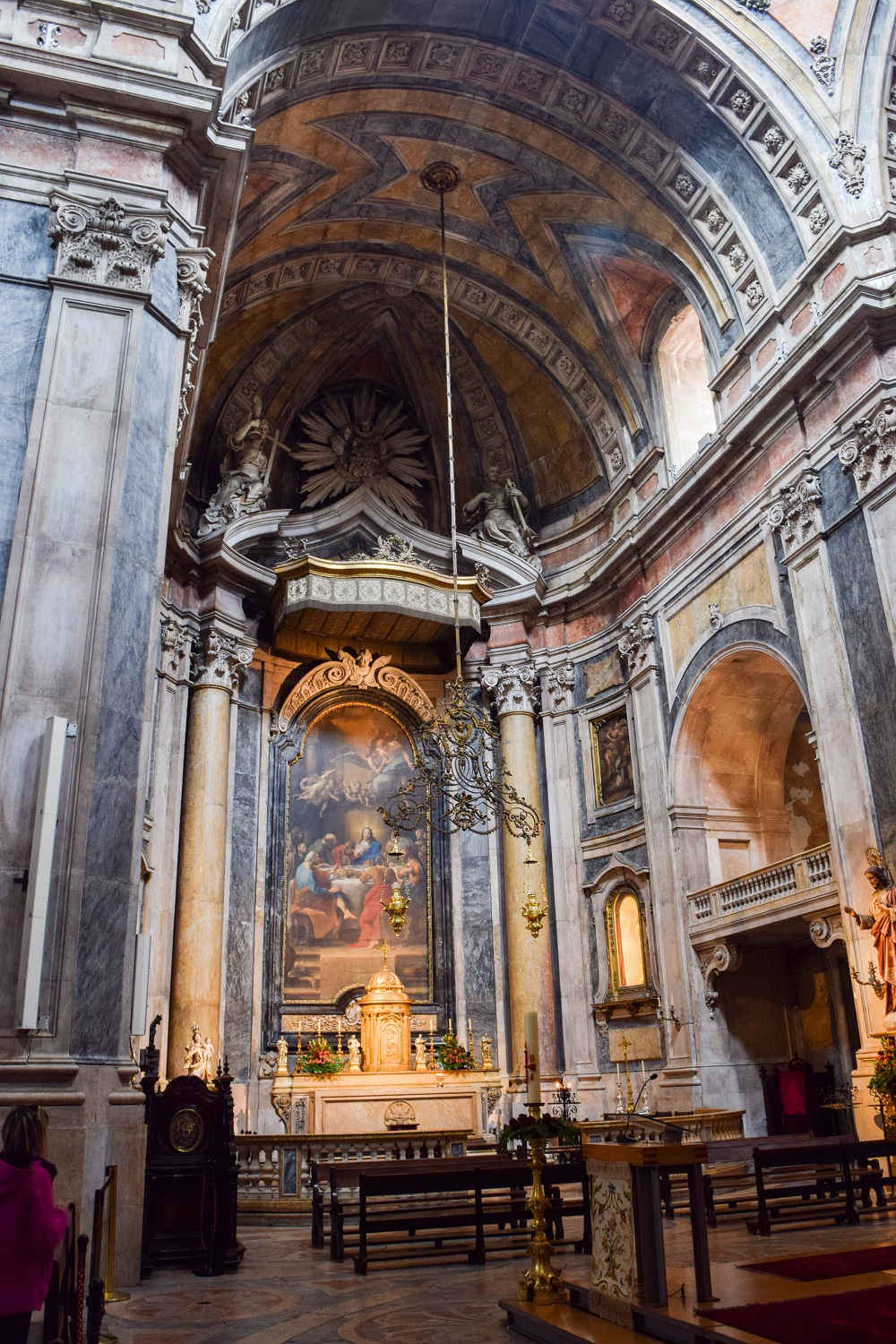 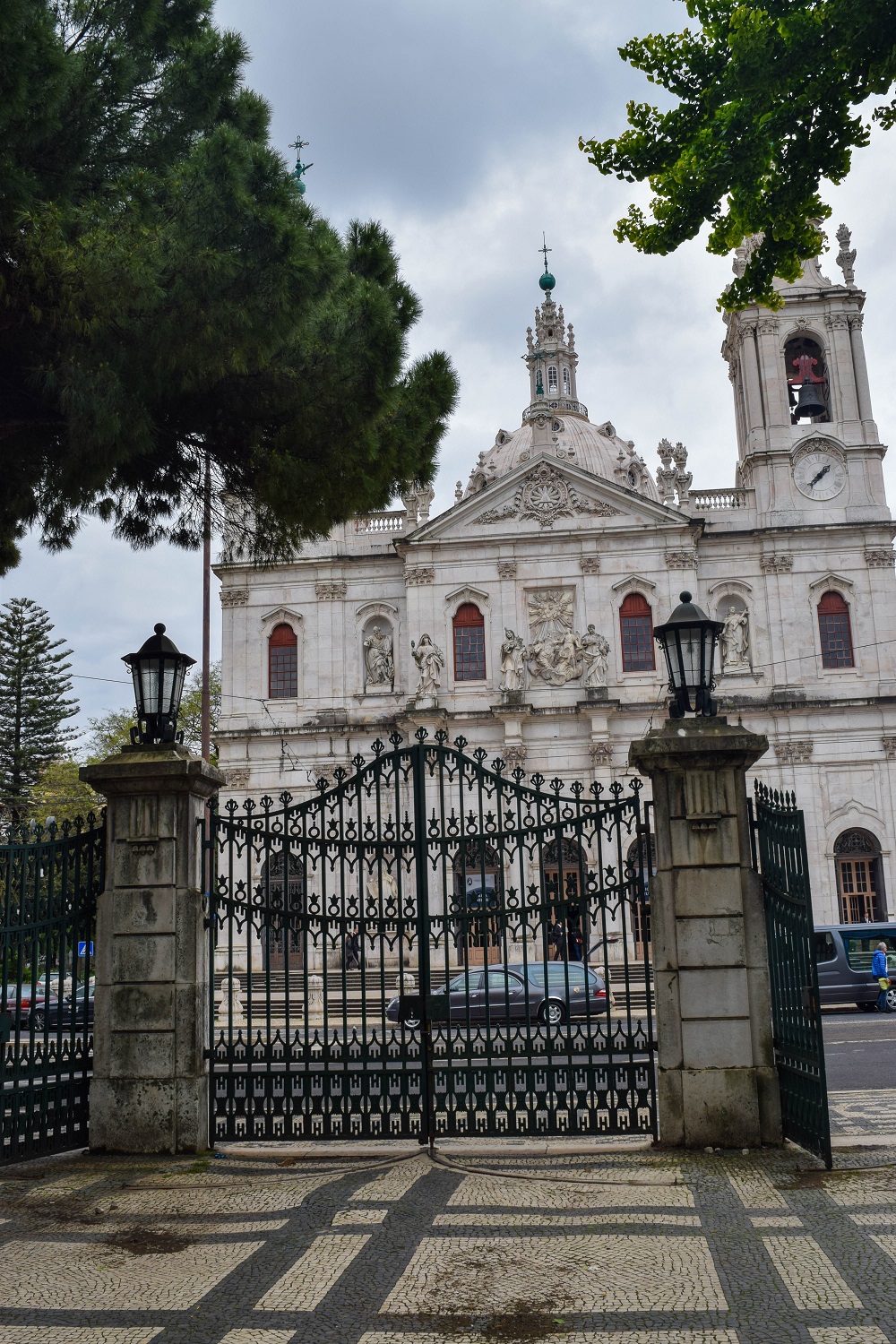 I left the church and walked across the street to the garden where benches sat under ancient looking trees and a few statues along the edges of small ponds and viewable from the paths or through the green plants lining the walkway. 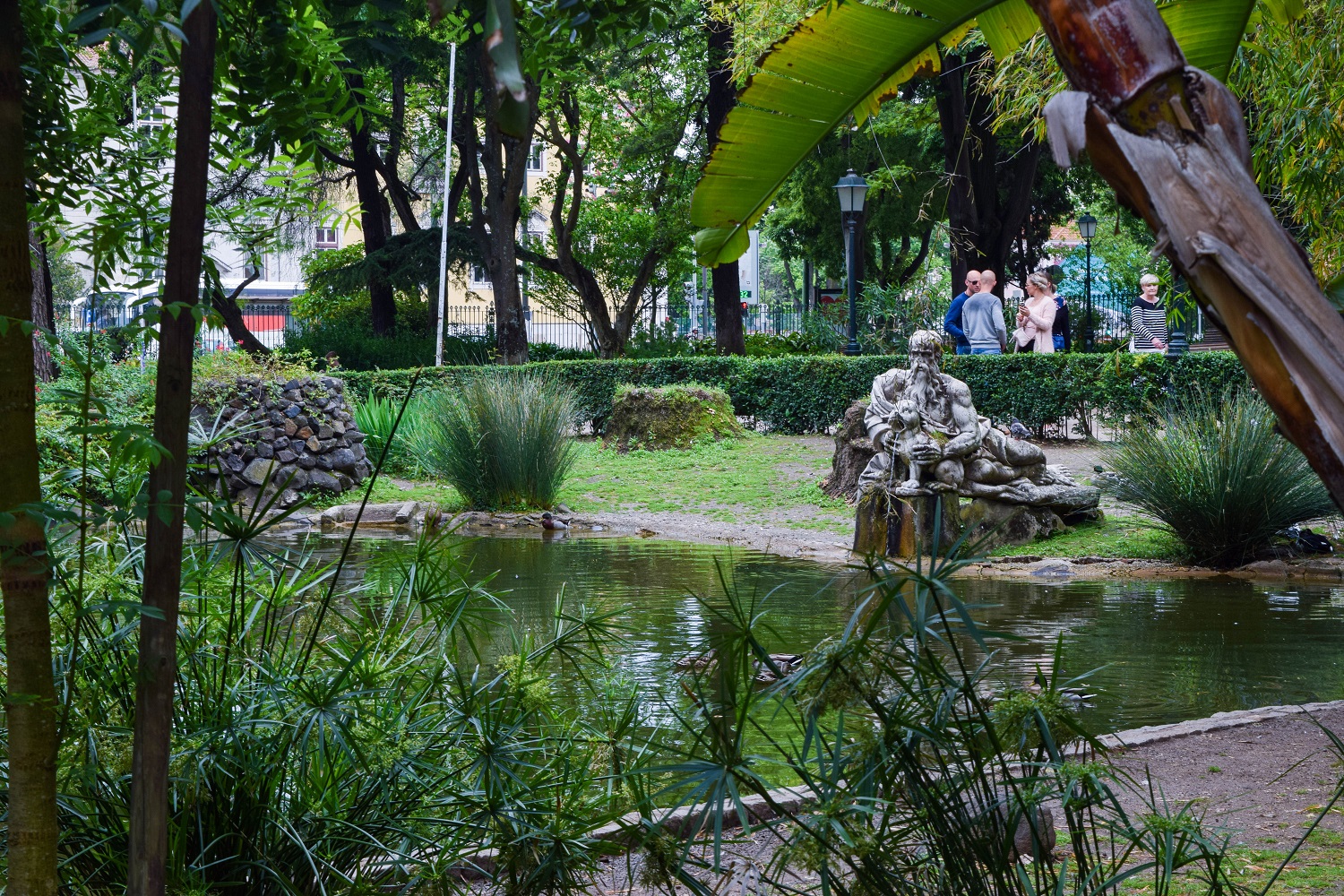 I would have lingered a little longer if I wasn’t so looking forward to getting on to Belém and the monastery. And so I walked back to my bus stop and didn’t have long to wait before it came by to pick me up for my last big site in my visit to Portugal. 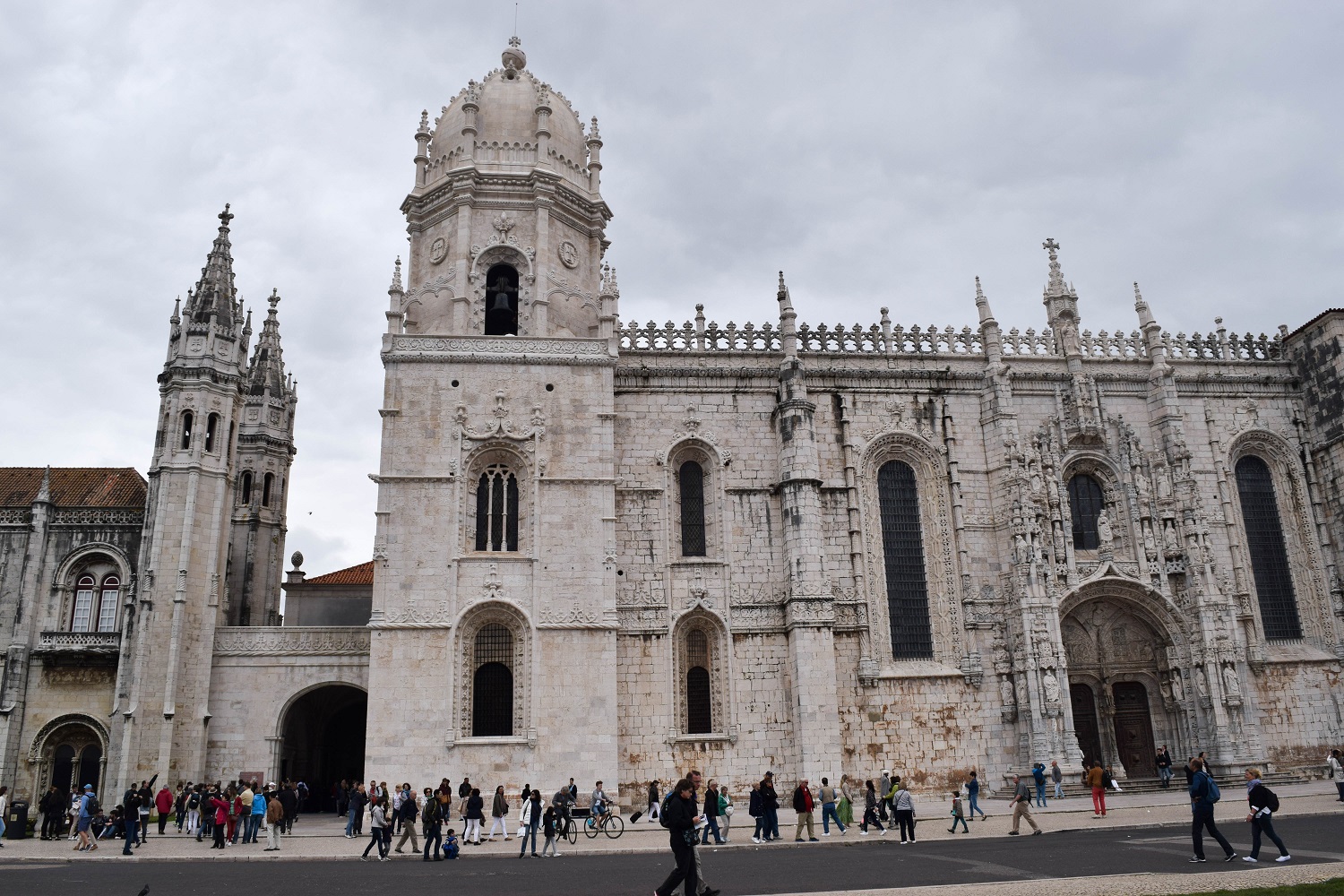 Sitting on the banks of the Tejo, the monastery took 100 years to complete. While also of course praying for the monarchy, the monks here prayed over the safety of the Portuguese sailors traveling to the then-ends of the earth; at least until the mid-19th century when the order was disbanded. 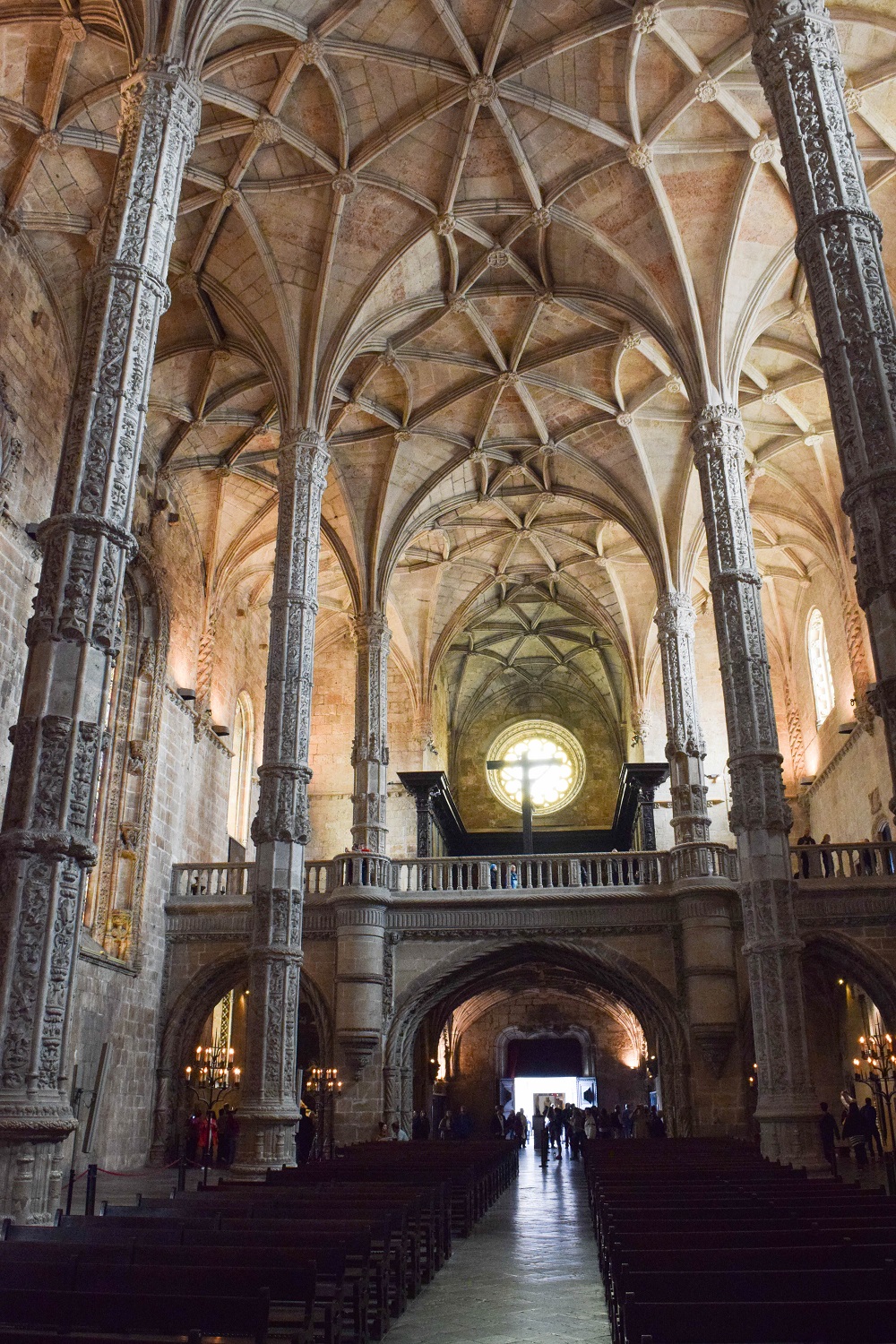 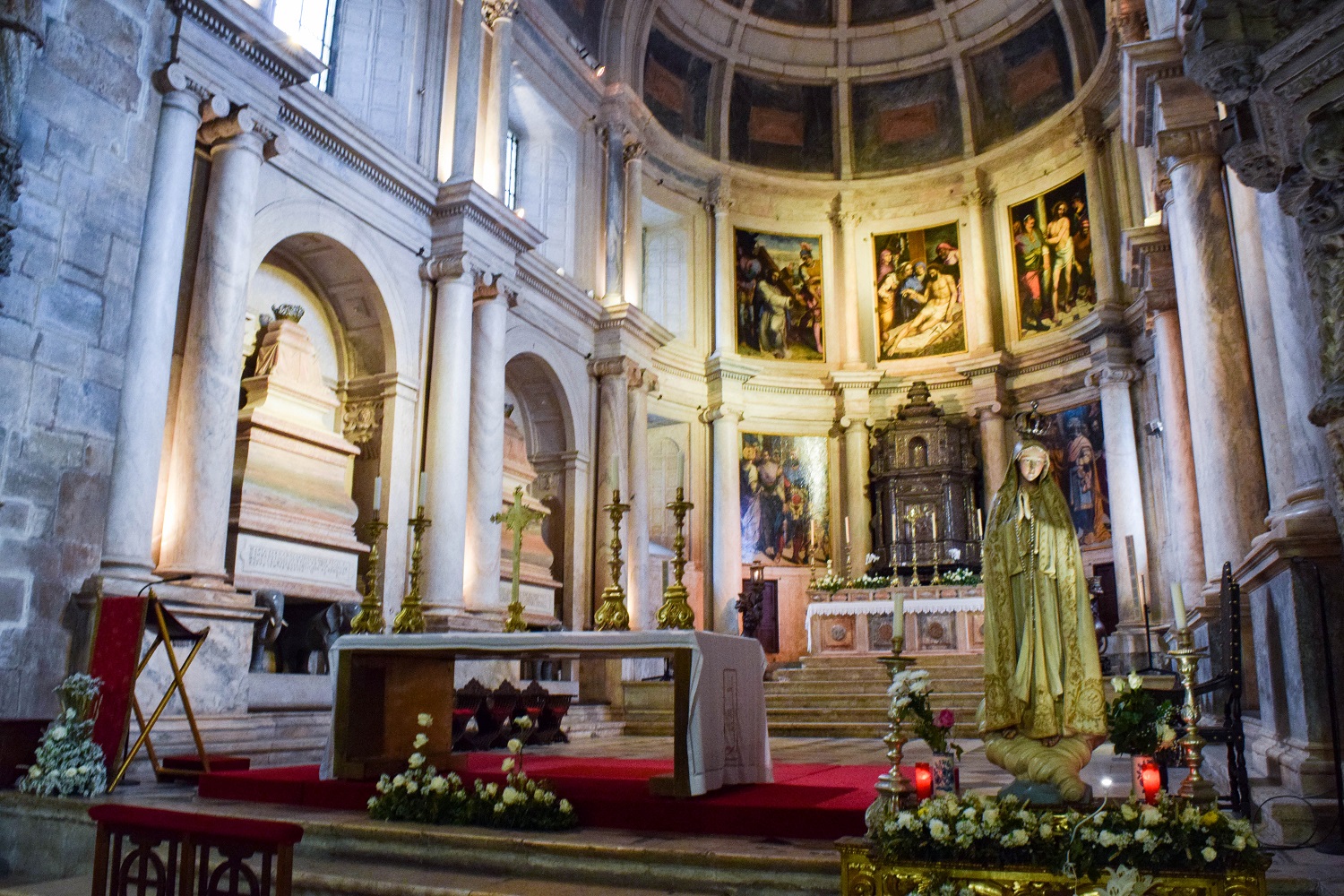 The bus drops you off at the far end of the monastery from the entrance, which is fine. Walking along its length, with the river to your right and the ornate building on your left, really sets the mood and gets you excited to enter. Once inside – it’s just…magnificent. Soaring ceilings higher than any I’d glimpsed that weekend, a long aisle before the transept and then the alter. Narrow stain glass windows line the churches and flanking the entrance lie Portuguese poet Luís Vaz de Camões and Vasco de Gama, the first European explorer to sail around the African Cape of Good Hope to reach India by sea.

But beyond the church is the courtyard where…my jaw literally dropped. I walked outside and my breath was taken away at the ornate carvings on every surface with arched walkways and windows. 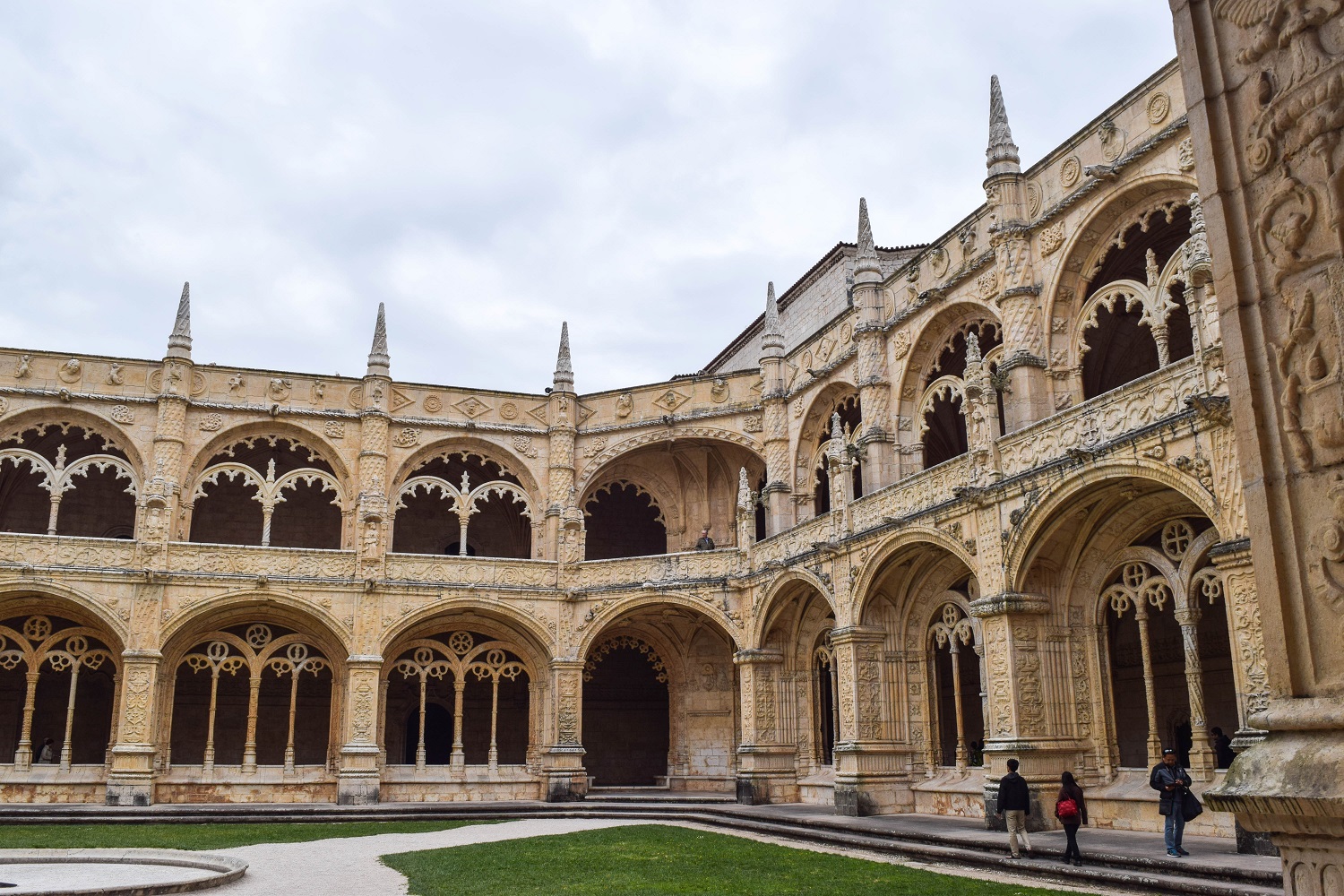 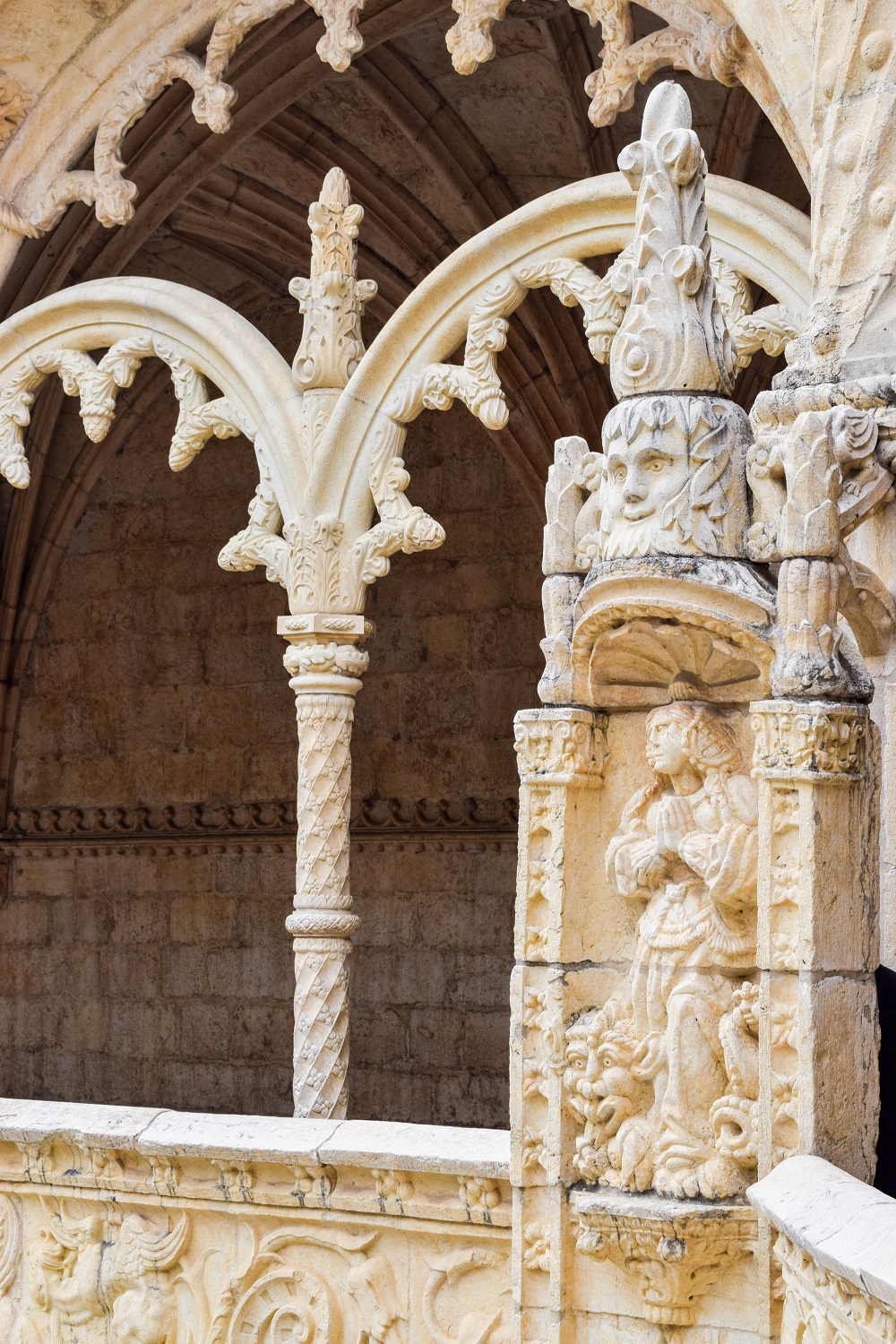 I walked slowly around the courtyard, and went upstairs to walk around again. Not to mention that you also get a chance to look out over the church from the choir loft on the upper story. And if the church looks amazing at ground level, it is spectacular from the second floor. Not to mention, that it puts the height of those glorious ceilings more in perspective. 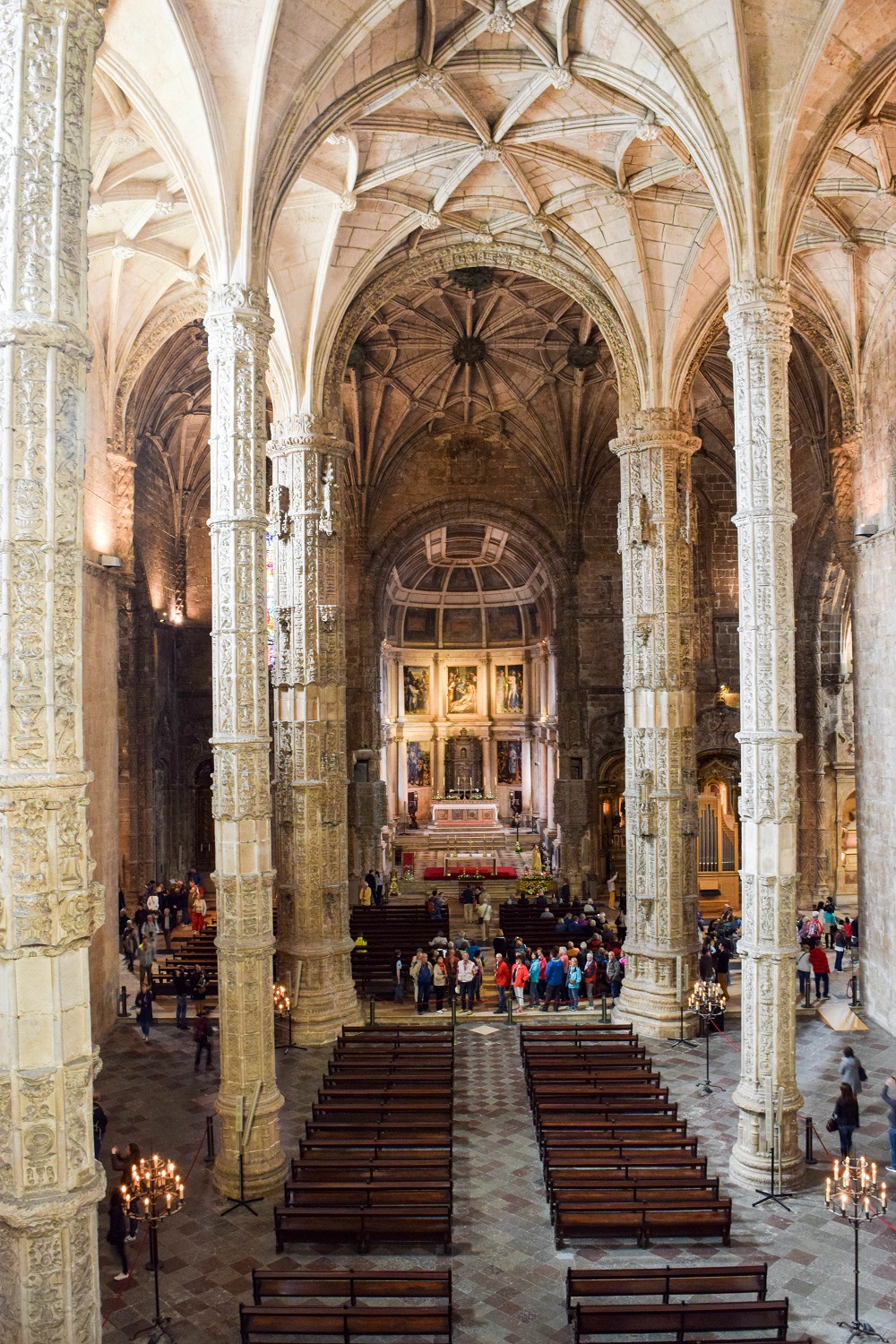 And then it was back to Lisbon for one last delicious dinner and gelato. It was a great experience to see how Portugal’s maritime history came influence its architecture and decoration. Before coming to Lisbon, I read a book about Portugal’s empire in the 15th and 16th centuries and read about places like Belém. It was a really great experience to put this sort of façade on that reading.

Until next time, Portugal. 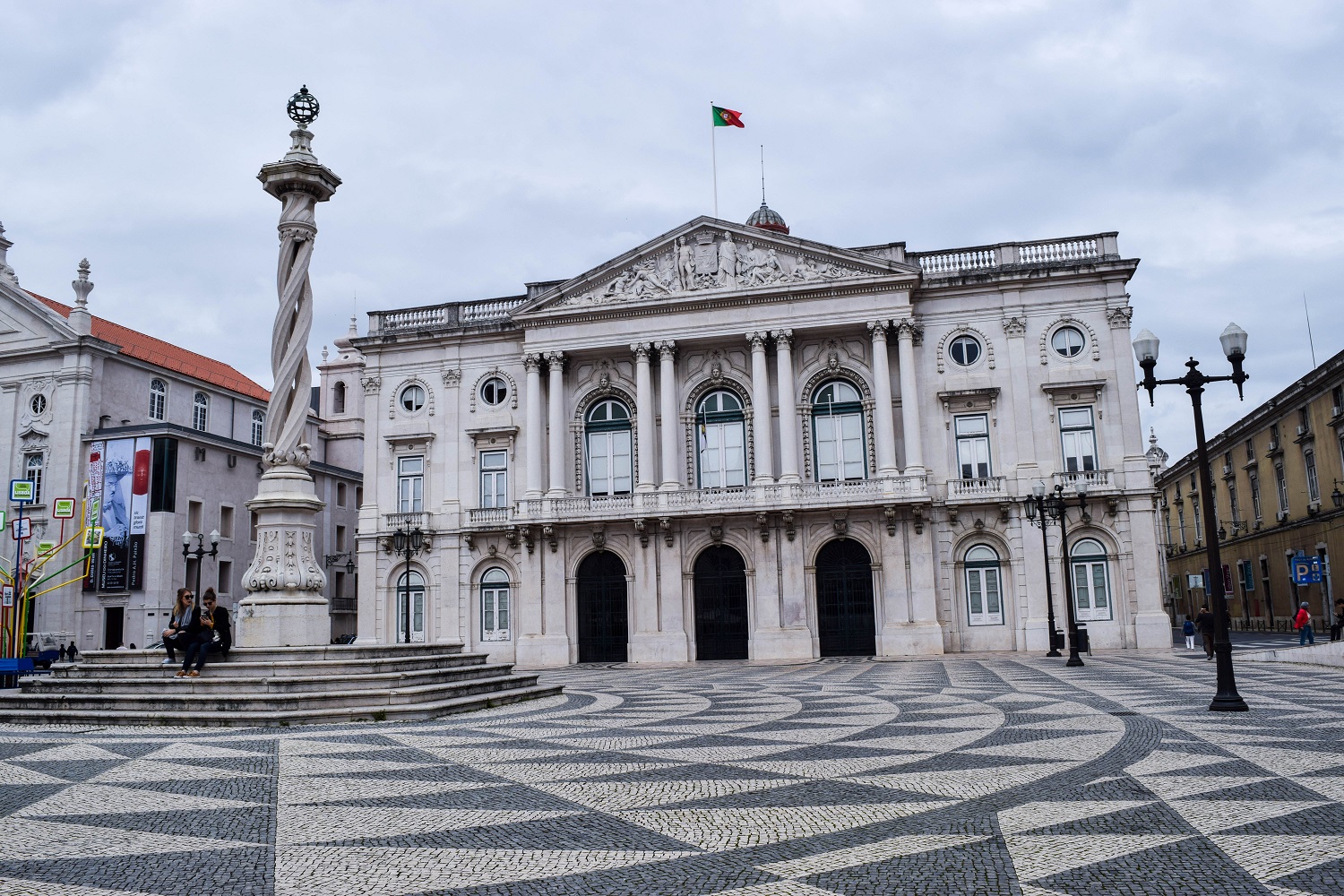 Back in Lisbon with a stop outside the City Hall and those beautiful stone patterns on the square.