I’m working on a new novel, but also working on it through a new technique (new for me). I’ve been more of a “pantser” when it comes to writing, at least after sketching out my characters and details about their lives. It’s just worked for me when a story happens much more organically. 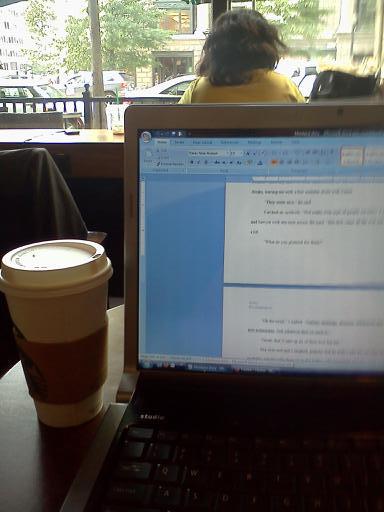 That’s not to say that I don’t outline. I will do a very basic outline of a few key turning points in the story I have in mind. I think the reason I don’t do much more detailed outlines is from years ago when a story went in such a different direction than I first planned, and even, to an extent, wanted. That story unfolded organically.

But this time around, I’m attempting to storyboard, after a fashion. There are ideas for scenes that aren’t yet happening, but I’ll write a brief note about it on an index card and set that aside. And then as I’m writing new scenes, I’ll write up index cards for each of those scenes with a few key points (characters, emotions, pivotal clues for later) and put them in order in front of my “later” scenes cards.

I thought about trying this a couple of weeks ago when thinking back to a recent story I worked on. There were scenes I moved around, but it was a little difficult to see at a glance how that affected the story. Or to see if there was a scene that didn’t fit where it was – but that I felt should remain – where the best place was for it. So far it’s been really helpful. I even created a reference card for my character’s family tree (an ancestor comes into play!) that is such a quick, easy-to-access reference point.

Do you storyboard? What do you think of this method? Or if you don’t, how do you plan/write your stories?