Waking up on a holiday Monday is far different than waking up on a normal Saturday or Sunday. I think maybe it’s because there’s no rush to do anything. All of my normal weekend errands have been run, and today’s just a day for me.

So today I actually slept in, well, until about 8 when my sister called me. Which was a good thing. Any later than that and I would have felt like my day was wasted (10 years ago I never would have thought I’d be a morning person!). I got some writing done, and some reading and then wandered around DC for a bit before heading to the bookstore. Not the most exciting of days by certain standards, and there were sill a few things I planned to do and didn’t, but still…

I also use three day weekends to really experiment. To bake new cakes or to try new recipes pretty unfamiliar to me. Like today. I’ve never made grits, and never thought it would be anything I would like. Until almost two years when I had shrimp and grits at a beachfront wedding, and then again on Friday night at a restaurant here in DC. And they’re actually delicious.

It just so happened too that I found a recipe in my inbox for shrimp and grits. I’ll post more about this experiment my food blog, but it was a success. There was a moment when I thought my shrimp wasn’t going to work out, but in the end…it more than did. It’s a little difficult to make this picture-pretty worthy, but here’s my dinner: 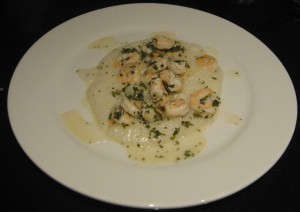